Today I’m sharing one of my favorite treasures!  I found this gorgeous couch on Craigslist about a year and a half ago and got a great deal on it.  This is the actual picture from the Craigslist post.

END_OF_DOCUMENT_TOKEN_TO_BE_REPLACED

Today we’d like to welcome our guest contributor and friend, Mandie McMurdie! She creates amazing spaces and shares her beautiful transformations over at MidMod Inspirations.

She has shared with us a super fun desk makeover for her daughter’s bedroom.  Just click here to see the before and after!  You’ll also want to check out how she redid the adorable stool.  This just might be the motivation I need to get to work on some projects I’ve been procrastinating…. Thanks, Mandie!

I love to antique shop, so when my husband and I found this super quaint shop in Groveton, Tx, I was in heaven. I found this chair right away for a steal of a deal. It was pretty rough, a little shredded in places and wobbly in others. But it was solid wood so I knew it had great potential. I brought it home and let it sit for months as I tried to decide if I should stain it or paint it white. I really like the clean-cut look so I went with white. (I know you natural wood lovers are going to kill me, but it was a choice I had to make.) So, now with the decision made I took it out to the garage and started sanding.

END_OF_DOCUMENT_TOKEN_TO_BE_REPLACED 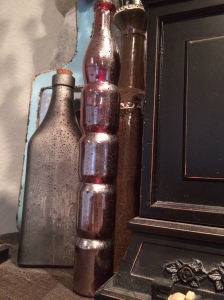 I think mercury is fascinating (it’s also an awesome song by The Counting Crows.)

Arguably the most beautiful heavy metal in existence, it kind of loses its appeal when you find out it happens to be deadly, so that’s kind of a downer.  But it’s just so crazy to see a metal be a liquid at room temperature.  This is also probably one reason mercury was used anciently, because it didn’t require heating to make it liquid and easily incorporated into the manufacture of other goods. That’s just my guess.  I could be way off.

Mercury was originally used to make the reflective surface of mirrors, which would probably be considered the first mercury glass.  But what we know and reference as mercury glass didn’t actually use mercury.  Instead, it was made by blowing double-walled glass and filling the center with a solution of silver nitrate and grape sugar and then sealing the object to contain the silver solution.

This tutorial is meant to mimic the effects of this silver nitrate solution on glass, but eliminates the hard parts, like, you know,  blowing double-walled glass, and obtaining silver nitrate, etc.  END_OF_DOCUMENT_TOKEN_TO_BE_REPLACED